In order to start – one has first to decide what the scenario of the control system is. Various factors are to be considered prior to parameterization in order to avoid ad-hoc applications. These include the following;

Also, where does the controller reside. Will the VSD react as the entire control system – or will it be a mere actuation device, controlled by and external PID system?

What type of input signals are used, as well as which input terminals are utilized on the VSD for this purpose?

Based on these questions we can set up a basic VSD PID control system. 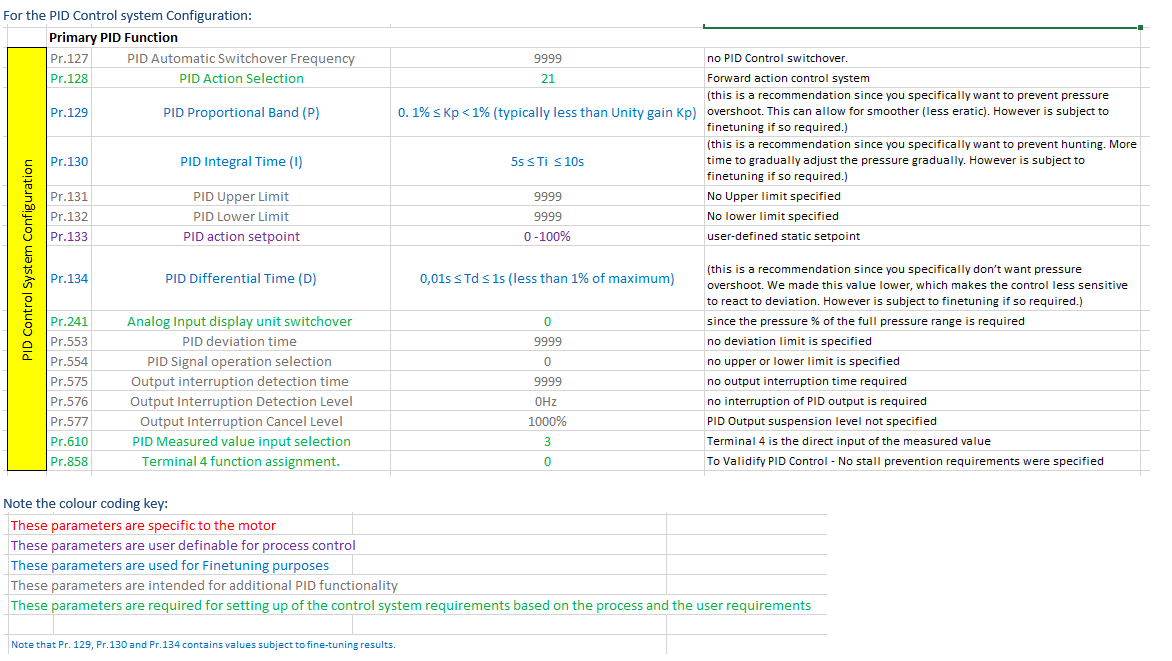 Here we opted for a standard Forward Action Control System – with Pr.133 representing the SP value and the Terminal 4 analog input representing the PV value (measured value). (Note that if a reverse action control is required Pr.128 = 20.

Terminal 4 is used for PV value. Pr.610 is to be set accordingly. In addition – the function of the Terminal 4 is to be established, and defined via Pr.858.

The Control System Model (unique to this application example.)

In this Control System Model – we have opted to have the control system PID computation to occur within the VSD itself. 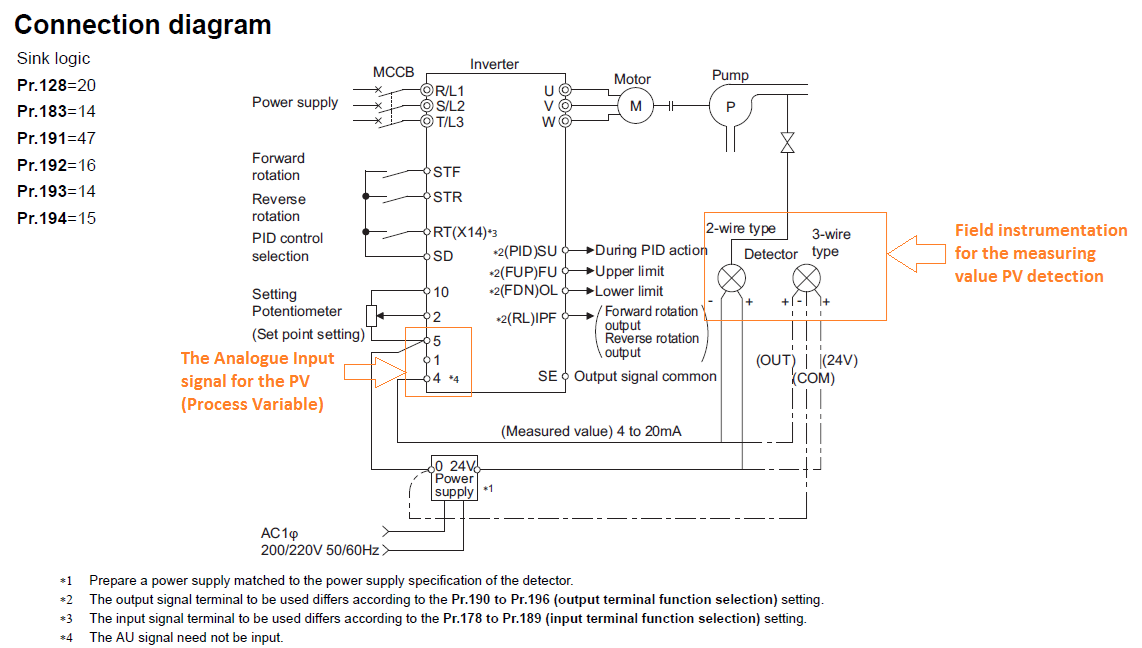 It should be clear that there are 3 separate sets of connections pertaining to a VSD, which is the power circuitry (input from the source. and output to motor). These are collectively known as switch gear circuits in industry. The control circuit (signals wired into the VSD’s control board) for interlocking and control purposes. The last set of inter-connections are that of the networks for bus interfacing (this will not be covered in this procedure.)

Notice the wiring for the PV into terminal 4 – as well as the type of transmitters (process measurement devices) which can be used for Process variable measurement. Both 2-wire and 3-wire instrumentation are accommodated.

This allows for VSD Forward action control – with the VSD acting as the controller and the actuator. 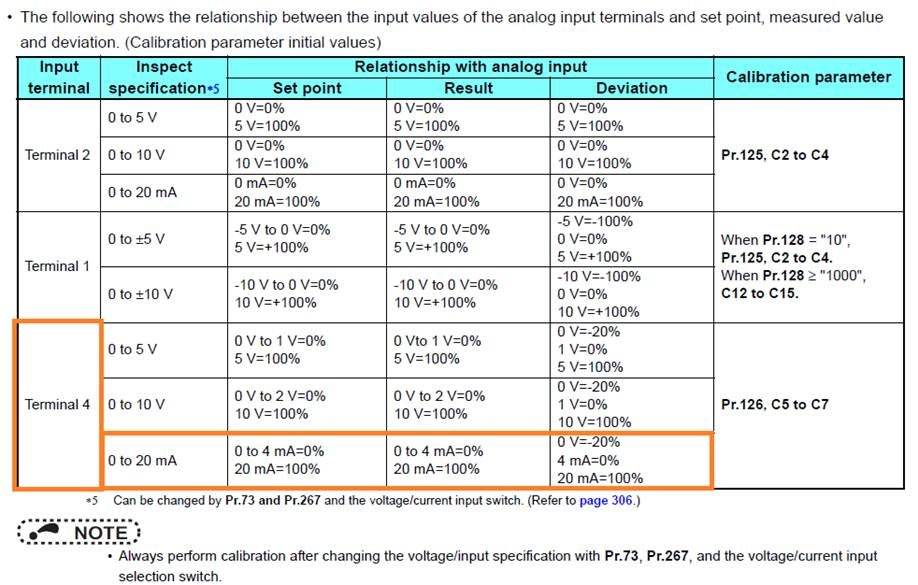 For this applications we will use Terminal 4 as the Process Measured Value input, as a 4-20mA signal.

Pr.610 = 3 allows for an direct analog signal input into the terminal 4 terminal – to represent the measured value input.

Pr.858 = 0 to allocate a Frequency speed reference command to terminal 4. Note that (AU signal must be ON)

We use cookies on our website to give you the most relevant experience by remembering your preferences and repeat visits. By clicking “Accept All”, you consent to the use of ALL the cookies. However, you may visit "Cookie Settings" to provide a controlled consent.
Cookie SettingsAccept All
Manage consent

This website uses cookies to improve your experience while you navigate through the website. Out of these, the cookies that are categorized as necessary are stored on your browser as they are essential for the working of basic functionalities of the website. We also use third-party cookies that help us analyze and understand how you use this website. These cookies will be stored in your browser only with your consent. You also have the option to opt-out of these cookies. But opting out of some of these cookies may affect your browsing experience.
Necessary Always Enabled
Necessary cookies are absolutely essential for the website to function properly. These cookies ensure basic functionalities and security features of the website, anonymously.
Functional
Functional cookies help to perform certain functionalities like sharing the content of the website on social media platforms, collect feedbacks, and other third-party features.
Performance
Performance cookies are used to understand and analyze the key performance indexes of the website which helps in delivering a better user experience for the visitors.
Analytics
Analytical cookies are used to understand how visitors interact with the website. These cookies help provide information on metrics the number of visitors, bounce rate, traffic source, etc.
Advertisement
Advertisement cookies are used to provide visitors with relevant ads and marketing campaigns. These cookies track visitors across websites and collect information to provide customized ads.
Others
Other uncategorized cookies are those that are being analyzed and have not been classified into a category as yet.
SAVE & ACCEPT
Powered by